Pottery Firing | What You Need To Know 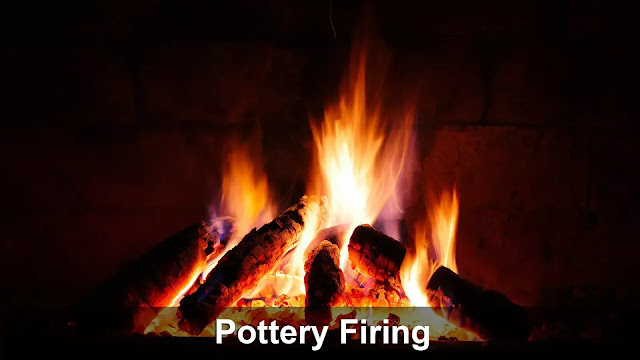 The objective of bisque firing or first firing is to convert greenware clay into a stable state in which glaze can be applied and fired again. After bisque firing, clay is transformed into a stable porous form ready to accept decorative work such as stain, underglazes, and glazes. While clay is in a greenware state is very fragile. Greenware is referred to as clay in any one of several stages such as wet clay, damp clay, soft leather-hard, leather hard, stiff leather hard, and bone dry. Greenware clay is very unstable. It can break easily and thus is near impossible for the artist to work on. By bisque firing greenware, turns the clay into strong crystalline in which the artist can handle and apply decorative glazes. After bisque firing, clay is greatly reduced from being damaged. The bisque firing also removes organic materials in the clay. The process of increasing heat causes many changes in the clay. After firing, clay can no longer be formed and shaped by the artist. It is in its final form.

Greenware clay is loaded into a kiln, and the kiln is slowly heated to where water in the clay starts to evaporate. Somewhere close to 1000 degrees, the clay pot becomes dehydrated and has changed to a point where it is in its final form. But the bisque firing continues until the kiln reaches almost 2000 degrees. Most of my artwork is fired at about 1800 degrees Fahrenheit. At this point, you could call the pot sintered. It heated to the point right before it would turn into a liquid. At this point, the kiln is turned off, and everything starts to cool down. The cooling is also a critical part of the firing because the clay has to cool slowly as not to break. Cooling the kiln to fast will cause the pot to break. The stress of the rapid cooling down is too much for the clay, and it breaks from the rapid temperature change. After the kiln has cooled down, the clay can be removed. You now have bisque ware.

Can you fire pottery in an oven?

No, you can not fire pottery in an oven. A kitchen oven does not get hot enough to sintered clay. To fire clay, temperatures need to reach about 1000 degrees Fahrenheit. A conventional kitchen oven can not get hot enough, plus it is not recommended due to it can cause a house fire. Kilns were invented to reach high temperatures efficiently and safely. This method of firing is more efficient than firing pots in an outdoor bonfire as they did back in tribal days. With the invention of the electric kiln and the modern-day computer controllers, kilns made firring pottery safer and affordable for most anyone. A modern-day kiln can be purchased for around 1000 or less depending on its size and other features.

How long can pottery sit before firing?

Cay can sit before firing anywhere from 1 to 4 days depending on the humidity in the air and thickness. Clay needs to be in a leather-hard state before firing. It needs to air dry. There are many factors affecting how long clay needs to air dry before its ready for firing. Humidity is a big factor. Too much humidity in the air will cause longer air dry times. In addition, the thickness of the clay also is a big factor. The thicker the clay the longer it will take to air dry and turn into a leather-hard state ready for firing. When the color of your clay turns into a lighter shade you will know your clay is ready for firing. The reason why clay turns into a lighter shade is that much of the water or moisture is gone form the clay. Typically clay has about 20 percent water. When drying my clay I always make sure it dries evenly on all sides as not to warp or break. Also, make sure not to make your clay pieces too thin.

After the pottery has been bisque fired and glaze applied it now time to glaze fire. After the glaze firing the pottery is now very hard and can hold water. The pottery has changed from being porous to waterproof. The glaze firing is the final step in creating ceramic pottery. the high temperature in the kiln melts the glaze and the clay fusing the pottery permanently. The kiln is heated to a high temperature and then slowly cooled. After the kiln has cooled down the pottery can be removed. You now have ceramic pottery that is waterproof and will last many years.

This reminds me of a story a while back when I was first starting out making ceramics. I was working with leather-hard clay and thought this is easy, and it's not a brittle as folks say it is. I can easily work on my artwork with no problems. At the time, I was working on a cat face. I was just about done after having spent several hours forming and bending the clay. I was very happy with the outcome and was about to set it down when I very lightly bumped the cat face into another piece nearby. The cat's face fell less than 2 inches. And to my horror, it was enough to break the leather-hard cat face into 2 pieces. I couldn't believe what I was looking at. The artwork I just spent hours working on was ruined from a drop of fewer than 2 inches. After this experience, I handle and treat leather-hard clay with kid gloves. I have a high degree of respect for clay in this form.

Now you know the pottery firing process and how a kiln is heated the first time to make bisque ware. A second firing is needed to fuse glaze to the clay making permanent waterproof pottery that will last for many years. Potters usually bisque fire and later glaze fire pottery. Firing is the most significant part of making ceramics. I hope this article was beneficial to you. Please take the time to check out some of my ceramic artwork. Also, if you have any knowledge you would like to share please feel free to comment below.